The Villa Cavrois has two façades of imposing dimensions. The more austere north façade evokes the silhouette of an ocean liner. In the south, the façade overlooking the garden works like a theatre curtain, erected along the terrace where family members gather. 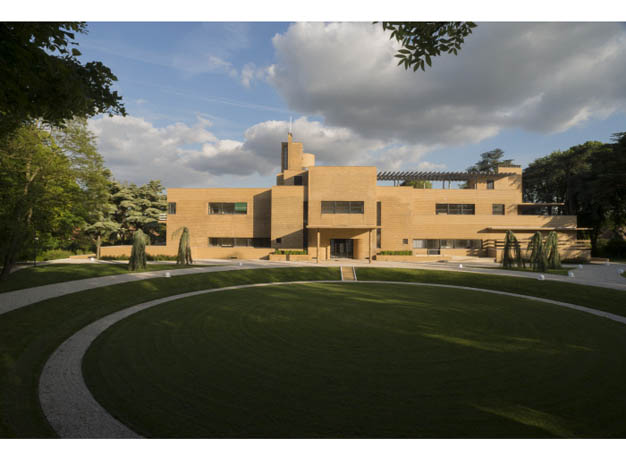 The aesthetics of the villa designed by Mallet-Stevens are modern, yet his plan is in the tradition of a French château: the distribution between two symmetrical wings; that of the parents on one side, and that of the children and servants on the other. The reception rooms in the heart of the main building, are extended by the alleys of the park and its water mirror. The villa and its grounds are firmly rooted in a very controlled spatial organisation, which results from significant work on the proportions, and which ends up in the definition of a "controlled layout".

In 1930, Mallet-Stevens and Paul Cavrois visited the site of the town hall in Hilversum, in the Netherlands, whose yellow brick cladding appeared resolutely modern to them. Mallet-Stevens made 26 different moulds, from a sample brought back from this trip, to obtain bricks that adapt to all situations (corners, curves). While bricks were still a traditional material in the region, their implementation at the villa Cavrois is bold:  the cladding ensures uniform volumes and emphasises the spectacular appearance of the building.

The horizontal lines are dominant in the silhouette of the villa: they are highlighted by the many terraces and how the brick facing has been handled. While the vertical joints have been made invisible, the horizontal joints are hollowed and painted black. This radical approach to the facing gives unity to the building as a whole

The staggered rooftop terraces accentuate the façades and emphasise the horizontal lines of the volumes. With their white guardrails, they evoke the decks of a ship and create viewpoints of the park and its surroundings.

On the top floor, the pergola serves more as a decorative element than for sun protection. On sunny days, its shadow projected onto the walls emphasises the stark volumes of the villa.

In line with the client's programme, which required air and light, Mallet-Stevens greatly opened up the façades with large windows. Mallet-Stevens' modernity is expressed by the size of the bay windows as well as in the choice of sash windows of North American inspiration.

The corner window of the Stairway of Honour, like the other openings, provides a choice view of the park.

The central tower houses the smoking room, Staircase of Honour and, on the top floor, a belvedere that offers a commanding view of the surroundings.

Both of mediaeval evocation and an allusion to airport control towers, this belvedere is a signal in the flat landscape. The silhouette of the tower provides a vertical counterpoint to the horizontal volumes of the architecture. This element echoes the belvedere of the Villa Poiret, which was razed, and the clock tower of the tourist pavilion that Mallet-Stevens designed for the 1925 exhibition.

> Discover the history of the monument
> More about the park, the dining room of the parents or the kitchen
> How did we restored the Villa Cavrois ?